It was a colorful scene in the Michiru Mountains. The whole village ran out and gathered at Namitalala primary school. Flags and balloons were not the only things that added color to the arid environment. Children in their green school uniform and brightly colored mouth masks were anxiously waiting for the ‘cars from the city’. A rarity in this area, some 19 km. beyond Chileka Airport and where a bicycle is the most luxurious means of transport.

Government officials and Stéphanos personnel were received with song. It was a special day for the community as this was the first time that an organization in this ‘backward’ area introduced an orphan care program! 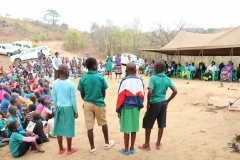 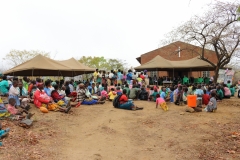 In the past few months, a lot of hard work has been done to get all the needs and thoughts of this community on paper. Ultimately, an agreement was reached and the 5-year project could be launched. The finances are made possible by Stéphanos Netherlands and a Christian organization from Germany. But the community and the government itself also contribute to this. In this way, the forces are joined and the child is carried by the care of many. Through this we hope together to improve the living conditions of the child in all kinds of areas, with the underlying goal that the child and parent will independently read the Word of God and may live according to it.

The presence of the International Director J van der Ham and Executive Director C. Kuyokwa was particularly appreciated and the children of Namitalala already have a place in our hearts.

Stephanos Foundation bids farewell to one of its long serving membersprevious

The impact of floods in Chikwawa through SDGs lens